Hello again and thanks for coming back for Day 2 of our trip, San Sebastián!

Where we left off was of us renting our bikes and filling our saddlebags full of things that would soon come in handy.

Our departure from Barcelona ended up being timed perfectly as demonstrations started for the vote for Catalonia to get its independence from Spain. Roads were starting to close and if you were watching, mayhem ensued.

As we got onto our Royal Enfield 500's and headed out of Barcelona with the set destination of San Sebastián we were trying our best to find our way out of the city and onto a highway. After a few wrong turns and some tricky roundabouts, we finally found refuge in the consistency of a freeway that would get us out of the chaos of the city.

It is quite a weird feeling to just hop on someone else's bike and ride long distances. There are a lot of things you need to get used to with riding a model of bike you have never ridden before like the balance, turning, controls, etc... And there are also things that are different that are unique to that bike individually like the throttle, gearing, clutch, etc... Once we got onto an open highway, our speed increased slightly but our mental pace slowed down. This happens when traffic becomes less congested and turns become fewer and far between. This allows you to look around, take in the scenery, and relax a little bit without feeling like you are being unsafe or not paying attention to something that could easily take your life.

Our motorcycles, on flat ground, maxed out at 120kph (75mph) and with a passenger, they maxed out at 105 (65mph). This is not what we were used to, coming from riding bikes that easily go over 100mph. This poses its own struggles and dangers since the speed limit was 120kph and we were going under the speed limit for most of the trip. If we were going uphill, forget about it...

All these things were somewhat of a surprise, but the biggest surprise was the tolls that we didn't account for. THEY WERE FREQUENT AND EXPENSIVE!!!!! In our ride to San Sebastián alone, we paid around 70€ (about $83) in tolls. In the video below, you can see us stopping at one of them that is 24.50€.

Despite the high and unexpected tolls, the ride was incredible. Our first glimpse of Spanish countryside came at great relief. Farms, old houses, churches, and vineyards were everywhere.

"An Image that was burned into memory was an antiquated farmhouse that was long since abandoned. I remember thinking to myself, what a paradise! But when passed it and looked back, bullet holes covered the entire side of the stone wall, surrounding a window where it looked like someone took their last stand during WWII... This sent a chill down my spine and reminded me that this paradise has long since been fought over and my generation has no grasp of."

The next unexpected event was the fact that two out of three of our bikes were burning oil at an extraordinary rate. We had to stop every 100-200 kilometers to top-off our bikes with engine oil which ended up being every time we stopped for gas and about halfway between gas stations. Here is a video of us topping off on the side of the highway.

Lagoonies Topping Off Oil On The Ride To San Sebastián, Spain

We were about 4 hours into the ride and our butts started to become numb and we felt our first feelings of fatigue. The scenery went from vibrant to dull and remained that way for a really long time. This is where, as you can see in the video above, Marlee put to use the airplane pillows I insisted on keeping and lugging along with us to create the ever infamous DUMPY BUTT!

1: The size and shape of your butt when you stuff two airplane pillows in your pants to stop your ass from going numb. Comes with the added benefit of being able to twerk and look like Kim Kardashian. 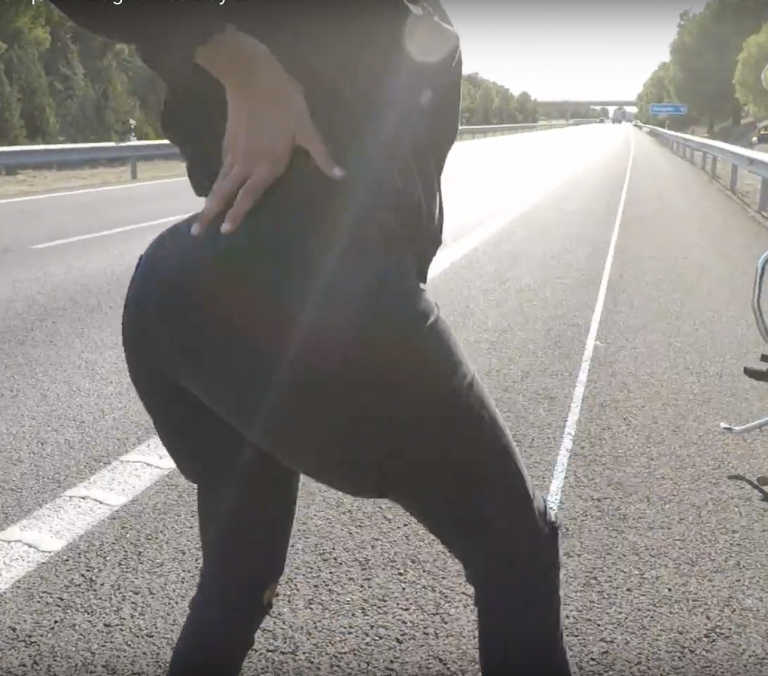 We now started to realize what we signed up for.... riding slowly and continuously through boring scenery that looked exactly like the drive from Arizona to San Diego. If you have ever done that drive you know what I am talking about; boring desert that seems to be endless and without life.

The sun starts to set after riding for about 6 hours. By now, the ride was supposed to be over but because of having to ride under the speed limit and stopping nearly every hour to fill up on oil or to give our asses a break, we were only about two-thirds of the way through the ride.

All at the same time, the sun dropped behind the mountains as we were reaching the base of them, meaning the temperature dropped 20 degrees in a matter of minutes. As we climbed the mountain, our jackets and layers became futile to the biting cold that penetrated our gloves and layers of gear due to the speed we were traveling.

There were however upsides! Our carburated bikes seemed to love the cold air and were running far more efficiently and virtually stopped burning oil. Also, the actual riding became far more entertaining with tunnels, turns, and elevation changes. We finally got to get into the "race mode" that we all love to feel when we ride.

We arrived into San Sebstián at around 9:00 pm. By this time we were several hours late for our Airbnb check-in, our extremities were frozen and numb, and our cell phones were out of data. We split up to find a cafe to get wifi and contact our host to find the condo we had rented. She was furious that we were so late, but we didn't care. We sought refuge like immigrants do the shore of the country giving them asylum.

As we got dressed in regular clothing and left the condo to find dinner, the shops, bars, restauraunts that were open and full of people were suddenly empty and closed up. The city of San Sebstián shuts down in unison in the matter of 20 mins, forcing us to walk to the "Plaza" about 15-minutes away.

Two of us settled for the first thing we could find which was airplane quality lasagna and beer. The braver two of us went to find something better, and with great reward, they found a super delicious and traditional style tapas restaurant.

Our bodies drained of energy and our minds still trying to figure out how we would finish the long journey if the first day was that hard. By this time, it was already midnight and we expired to our condo, split and chugged the complimentary bottle of wine, and went to sleep.

The next morning we rose at around 7am. It was cold and the air was crisp. Refreshing but rough for our achy bodies. We set out for breakfast and a little bit of sightseeing before we had to get back onto the bikes for another very long day.

San Sebastián is absolutely stunning. It has a very classy and French feel to it (France only being 25 min away) with the architecture and the locals that don't smile back. Here are some pictures! 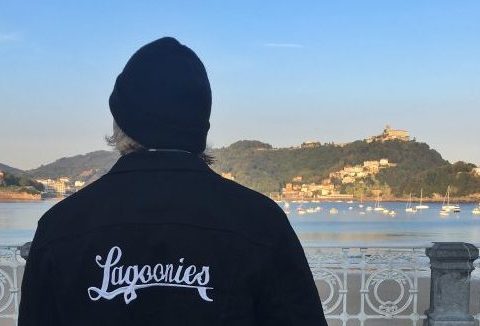 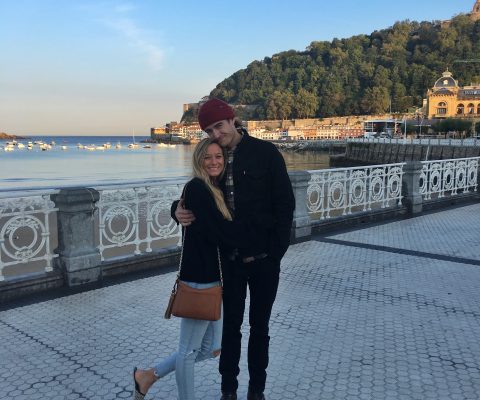 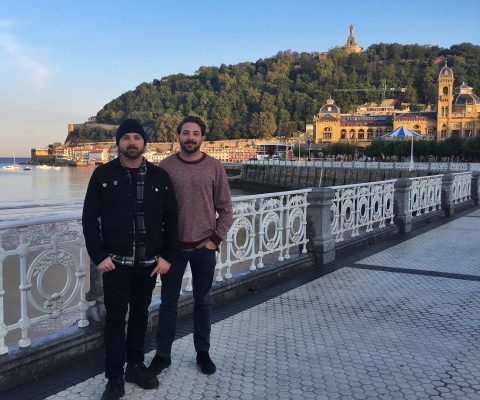 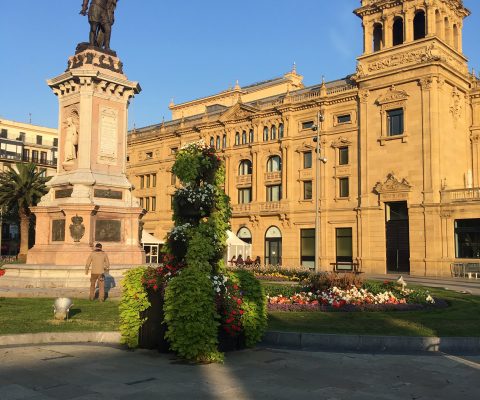 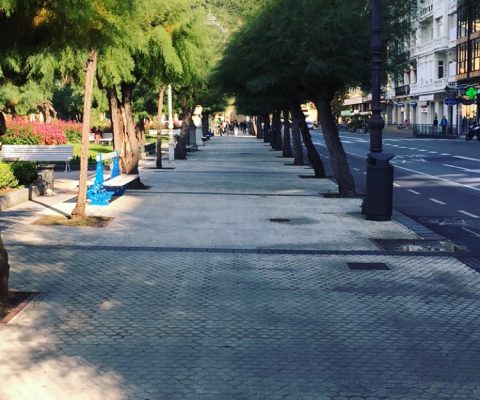 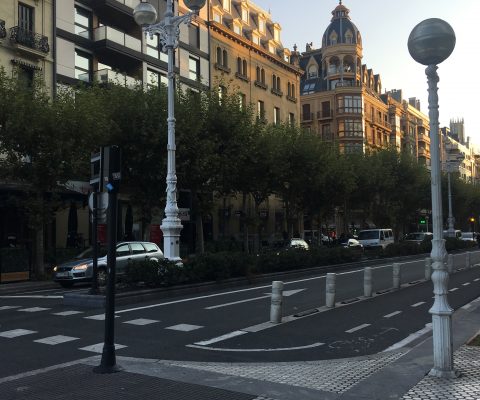 After wandering around trying to find the right ATM and refilling our cell phone data, we started to pack up to get back on the road. Two of us thought that finishing the rest of the trip on a motorcycle was too much pain to bear. They decided they would ride back to Barcelona and rent a car to meet us in Lagos, Portugal.

My brother and I were determined to ride the rest of the trip. Although we didn't want to split the group up, we wanted to get back on the road.

We loaded up our motorcycles, got geared up, and headed to the nearest gas station on our way out of town. After topping off on gas, oil, and snacks we started making our way out of town. As I am following my brother who had the directions on his phone, I saw puffs of white smoke coming from his engine. This is normal if you spill a little oil onto the engine casing; it burns off quickly in the form of thin white smoke that can easily be identified by smell. I decided he just spilled some oil and everything was fine.

After a few minutes of riding the white smoke kept getting thicker and more abundant and was starting to come from both sides of his bike. I pulled up beside him in traffic to investigate and looked down to see oil violently shooting from his engine casing, all over him and his bike.

I flagged him down and we immediately pulled over onto the sidewalk.

When we topped off on oil, he forgot to put to put his cap back on, meaning that the oil cap could be anywhere between us and the gas station we left several minutes ago.

He jumped onto my bike and went on the search.

I starting cleaning off the bike and filled it back with oil. I waited anxiously for him to return.

Feeling thankful and relieved we attempted to screw the cap back on but it wouldn't thread in..... The threads had been damaged with road rash.

We spent the next 30 min attempting to bend the threads back into place (something that is usually impossible) with pliers, wrenches, and screwdrivers. Somehow, by the grace of Saint Sebastián himself, it screwed back in.

Finally, we were able to mount our steads and get the fuck out of Dodge.

To great relief, the ride to come was some of the most captivating and fun we would have all trip; which I will outline in Part 3, so stay tuned!

Here is a little sneak peek of the beautiful riding in the infamous Basque Country!